The team proved to have a strong roster of drivers for the Manufacturers Cup, taking the top spot in qualifying in the Yamaha Senior and Pro IAME Junior categories on Saturday. Alexander Kardashian, who snagged the pole in qualifying in Yamaha Senior, stayed at the front of the pack all day, taking home the win in the final. Teammates Dakota Pesek and Brandon Lemke joined him on the podium in second and third, respectively. Jordan Bachmeyer, Marina Walters, Carter Pease, and Derek Hughes all earned top-15 finishes in the competitive senior field. Cayla Chapman also ran in Yamaha Senior, but an unfortunate crash in Saturday’s prefinal removed her from the competition for the weekend. On Sunday, Top Kart was back on the podium with Kardashian in second, and Pesek in third. Lemke, Pease, Bachmeyer, and Hughes made up the seventh through tenth place positions in the finishing order.

In Pro IAME Junior, Conner Ferris scored the pole position in qualifying on Saturday. He later earned a tenth place finish in the final that day. On Sunday, he improved three spots to finish seventh in the final. Kaden Wharff placed fifth in Saturday’s final. He found more speed overnight and returned on Sunday to secure the pole in qualifying, followed by a trip to the podium for his second place finish. Tyler Ferris earned solid sixth and eighth place finishes for the weekend. Pauly Massimino finished 11th on Saturday, improving to fifth on Sunday. 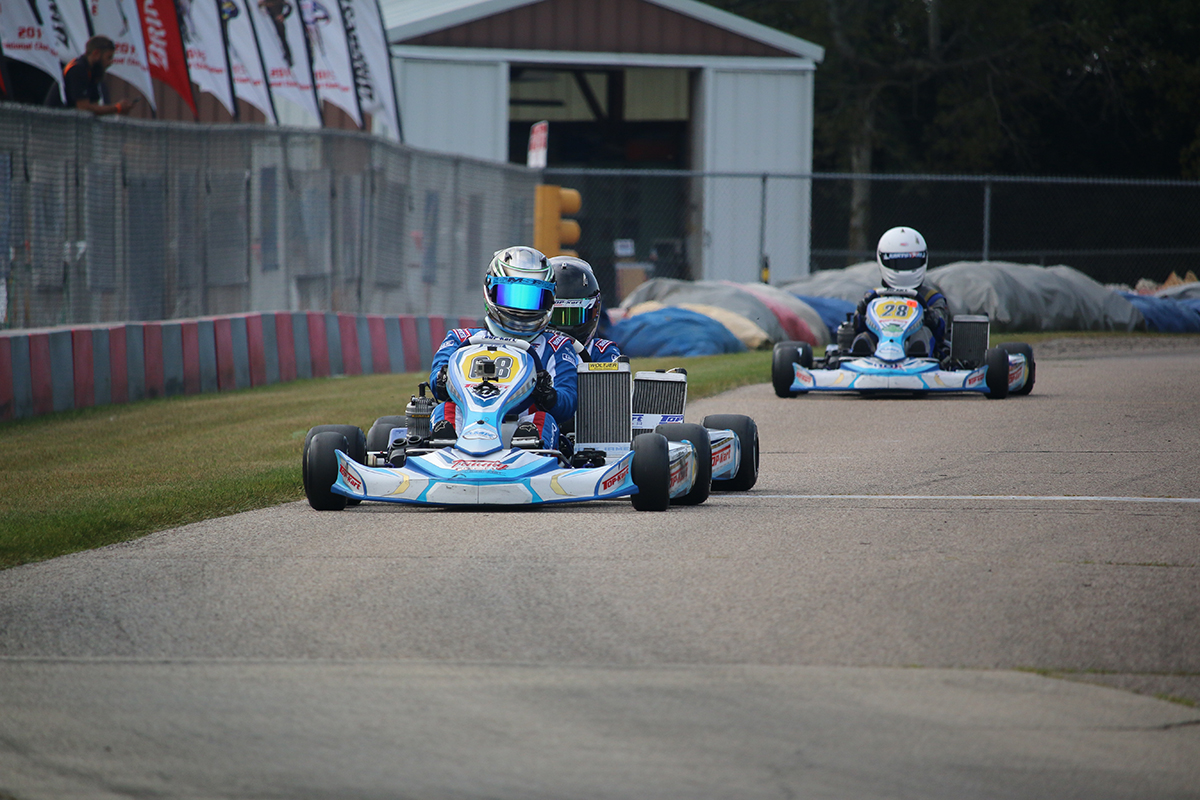 Pro IAME Senior was the home of four podium results including a race win between two drivers. Alexander Kardashian scored the victory on Sunday followed by Brandon Lemke to make it a Top Kart USA 1 – 2 finish. On Sunday, Lemke would remain consistent with another second place result while Kardashian would close his weekend with a third place finish.

Kardashian would continue his winning ways in Yamaha Senior by scoring Saturday’s pole position and main event victory with Dakota Pesek and Brandon Lemke chasing him to the finish for a clean sweep of the top three by the Top Kart brand. Sunday would see Kardashian add an extra podium with a second place result while Pesek and Lemke finished third and seventh respectively.

“Another FANTASTIC weekend at the AMK Race Products National WKA event at Dousman, Wisconsin for Alexander Kardashian and his 2017 Top Kart Twister! Competing in both the Yamaha Senior and IAME Senior classes, Alexander earned two fast-time pole awards, multiple victories in the weekend’s prefinals, two top-step podiums, a second place, a third place, and finally, was the over-all weekend winner in BOTH classes,” explained Chris Kardashian. “These accomplishments can be attributed to the new 2017 Top Kart Twister chassis; it’s dependability, it’s ease of tuning, and it’s quality. You may be wondering how often we have taken a kart from track to track without making changes in our 12 years of karting experience prior to racing the 2017 Top Kart Twister. It has NEVER happened. When the Top Kart factory asked us what changes we want to make to the kart in 2018, we answered, “Don’t change a thing!” As the old cliché goes: ‘If it ain’t broke, don’t fix it!’” 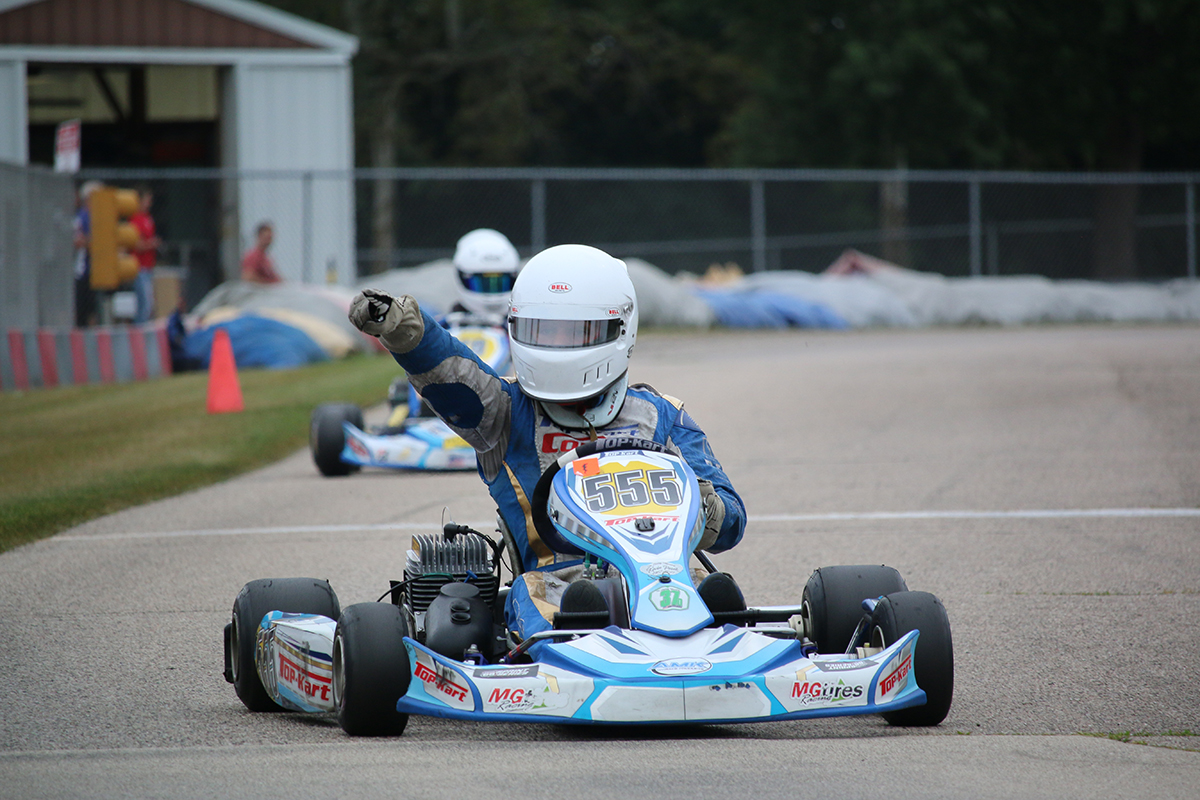 Tyler Ferris would lead the Top Kart contingent in the Yamaha Junior class adding another podium to his 2017 resume. With a second place result Saturday, Ferris would score Sunday’s pole position before adding another second place result in the day’s main event. Kaden Wharff had a weekend of bad luck getting caught up in others on track incidents and would end his weekend with 16th and sixth place finishes.

Zach Collins would add a ninth place finish in Yamaha Sportsman while Thomas Annunziata would finish ninth and tenth in the Pro Swift Sportsman main events. In the Kid Kart class, Chase Groh took home a pair of fourth place finishes to end a solid weekend of competition.

Top Kart USA’s Blake Deister added, “Another weekend of racing in the books for our team. After a solid four weeks of racing in a row the drivers on Top Kart have had yet another fantastic performance. Really gaining ground in the eyes of our competitors on how well the chassis are performing. Not doing well just one lucky race weekend but event after event they see what the product truly is capable of with the minimal adjustments necessary through the event.”

Top Kart USA would like to congratulate Brandon Lemke and Pauly Massimino who claimed the WKA Mid-Season prize which included an invitation to join Team USA at the 2017 IAME World Finals in Le Mans, France.

Just one week later and it was back to the same facility for round five of the Route 66 Sprint Series where Top Kart added another three victories, two pole positions and eleven top-five results.

Alex Kardashian continued his podium streak with second and third place finishes in the IAME Senior class as well as a pole position and a pair of victories in the Yamaha Senior ranks. Dakota Pesek would follow Kardashian across the line on Saturday in the Yamaha class to score another 1 – 2 finish for the team but would narrowly miss the top-three with a fourth place finish Sunday. Top Kart would also enter five other drivers in Yamaha Senior including Jeremy Fierke (11th and 8th), Josh Fierke (14th and 11th), Brant Carter (23rd and 23rd), Anna LeClair (27th and 24th) and Nate Dean (27th and 22nd). After all the championship points were tallied, Kardashian was named the Yamaha Senior champion with Pesek being named the Vice-Champion.

Kaden Wharff added four top-five results including a race win during Route 66 competition. In the IAME Junior class, the talented Junior driver would claim second and fifth place finishes while in Yamaha Junior he claimed a fifth place result Saturday and ended the weekend on a high note with a victory on Sunday. Wharff finishes third in the IAME Junior overall title chase even though he missed round three earlier in the year. 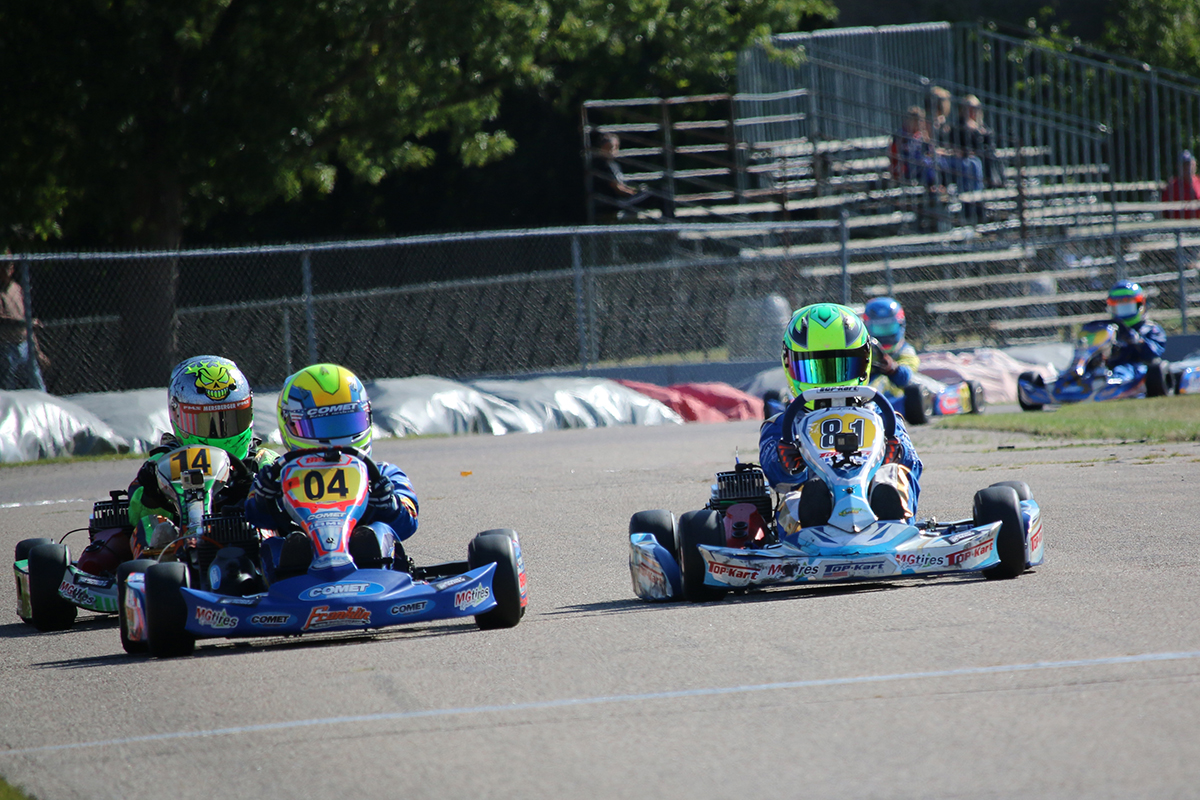 Zach Collins had an impressive drive the entire weekend in Yamaha Cadet and finished second and fourth on track respectively. Unfortunately he ended up officially in ninth due to a five second bumper penalty that occurred early on in the race battling. In his best event all season, he looks forward to 2018 carrying this momentum while moving into the junior ranks.

Wyatt Kessinger scored a pair of podiums in Kid Kart finishing second and third to claim a second place finish in the overall championship standings, short of the title by a mere five points.

Take A Ride With Kaden Wharff During The Yamaha Junior Final on Sunday!